But that’s really deep-down. I feel completely blessed to have such an amazing life that I honestly love. And fully enjoy. Like the weekend of the 4th. We spent Friday day and night with family eating and setting off fireworks. The next day we went boating on the river with my in-laws. Then running along the lake while Hubster went for an open-water swim.

Until it hits me.

I’m so sad that we don’t have kids yet and I’m terrified we won’t. All of a sudden the faith I clung so tightly to seems to have vanished.

Hubster and I agreed to do a home insemination this month because I guess my faith started dwindling. He’s been having issues with finishing since I started Clomid again and I just can’t go through the pain and discomfort only to not have any swimmers actually shoot into me. Plus we needed a way to get back to simply enjoying sex.

But then we hit a couple of bumps.

This month I didn’t take Clomid. I had a bad month on it last month so it was kind of a relief not to take it. And then I ordered our supplies (speculum, syringes & sterile cups) late so their arrival date was scheduled for CD12. And I usually ovulate before then. 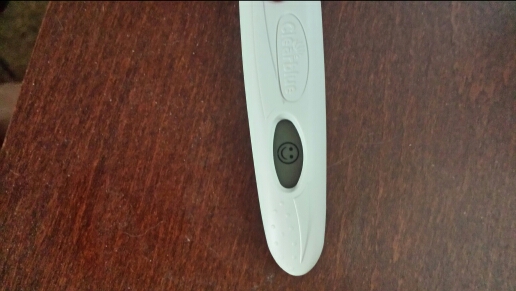 I decided we were going to try after all.

Luckily we had sex (to completion) the night before so I told Hubster it was negative to try again. But then I foolishly told him the truth so it didn’t work, of course. Ugh. The next day I got another smiley and this time I did a good job of keeping it to myself and was rewarded with swimmers.

The next day we tried our experiment.

Hubster did his thing into a cup and we made our Cock Cocktail! Hahaha we were really amusing ourselves throughout this process. Anyway, I pulled up some preseed into the syringe, Hubster pulled up the swimmers and then we put more preseed in it. Once the syringe was ready, I lubed up the speculum, shoved a small sex ramp under my hips and instructed Hubster in how to insert it.

That’s when I remembered just how crazy a speculum looks!

But it was fine. Once he opened me up I had him take a picture because I wanted to see my cervix and when would I ever have that chance again? And he was getting weirded out by it so I had to see it.

And it was weird.

So he shot the Cock Cocktail into me and then he snapped a picture. That one was even crazier!

And then I laid like that for 30 minutes while we chatted and laughed. It ended up being a pretty fun experience. One that I prefer over finding a new RE to do IUI’s in their office. No it’s not as effective, but this gave us some quality time and allowed Hubster to take an active role in the process.

But the excitement has worn off.

I started obsessing about whether we even really had a shot this month. Then I just gave up. I’m over the hoping and thinking positively now. I’m grouchy and stressed. And simply depressed.

I know I’ll be fine soon. For now I’m just going to wallow.

What are you looking for?

Navigating the Land of IF

What I Write About…